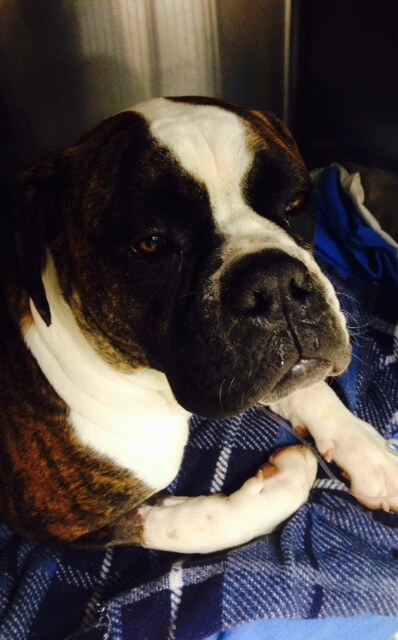 This is Sherman, roughly a 17 month old Boxer mix. He presented to MVVH on 5.18.2015 for a weekend of vomiting and not wanting to eat. Upon a good physical, blood work and an ultrasound it was diagnosed that Sherman had eaten something he probably shouldn’t have! His owners gave us the go-ahead to take him to surgery. A foreign body was removed and Sherman returned to recovery. Within two days Sherman still was not feeling up to snuff and vomited again, which we always become concerned about following such a big surgery. Dr. Amber re-ultrasounded him and found that he had fluid in his abdomen and that emergency surgery was going to be required to go back into his abdomen and get rid of the fluid and find out the cause. Sherman had what we call a Sterile Peritonitis (a sterile inflammation within his abdomen), but without fixing the issue and getting rid of the fluid Sherman would not recover well. The owners gave us permission to take him back to surgery. The issue was resolved and Sherman was kept another four days. We had to keep him longer than most foreign body surgeries because we had to make sure he could handle multiple small meals, that he continued to drink and eat without vomiting, that his temperature stay within normal limits and his attitude remained bright and alert. We are happy to report he revisited us on 5.26.2015 and was doing GREAT! Sherman was an intense case that touched all of us, and we are SO happy we got to send him home with a good bill of health!